So it has been a long time since my last blog, infact I never even wrote a blog about adding RDR2 RP to the site and the new menu bar changes. I assume everyone is fairly aware of those changes by now though. I do not currently like the new menu bar and I have heard from some users they also don't like having to click on a page after changing server and such. Rest assured addressing these concerns is high up on my TODO list.

POV Viewer - See who was online and their approximate POV from clips and VODs! 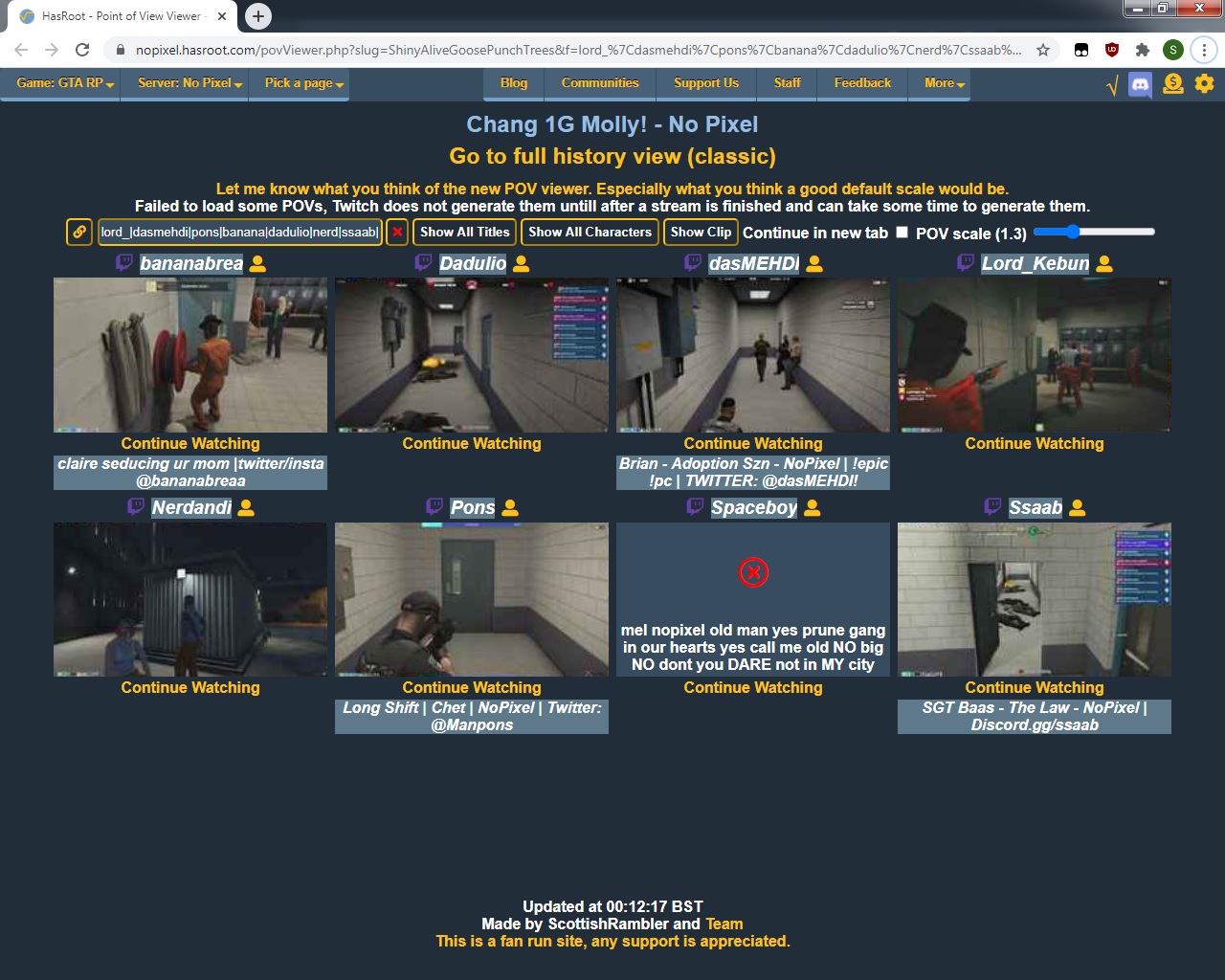 I imagine some of you may have noticed by now but we have a new beta POV viewer which acts as a landing page for the history page. It shows the thumbnails of the time associated with a clip or moment from a vod (the page takes either a clip parameter or a server and date time). You can search by titles, streamer names and character names on this page in the same way you can on the history and stream pages. All our clips features and user scripts now link to the POV Viewer so check it out now! Here is an example you can check it out from the Chang prison riot.

Streamer Settings - Login with Twitch to edit your characters! 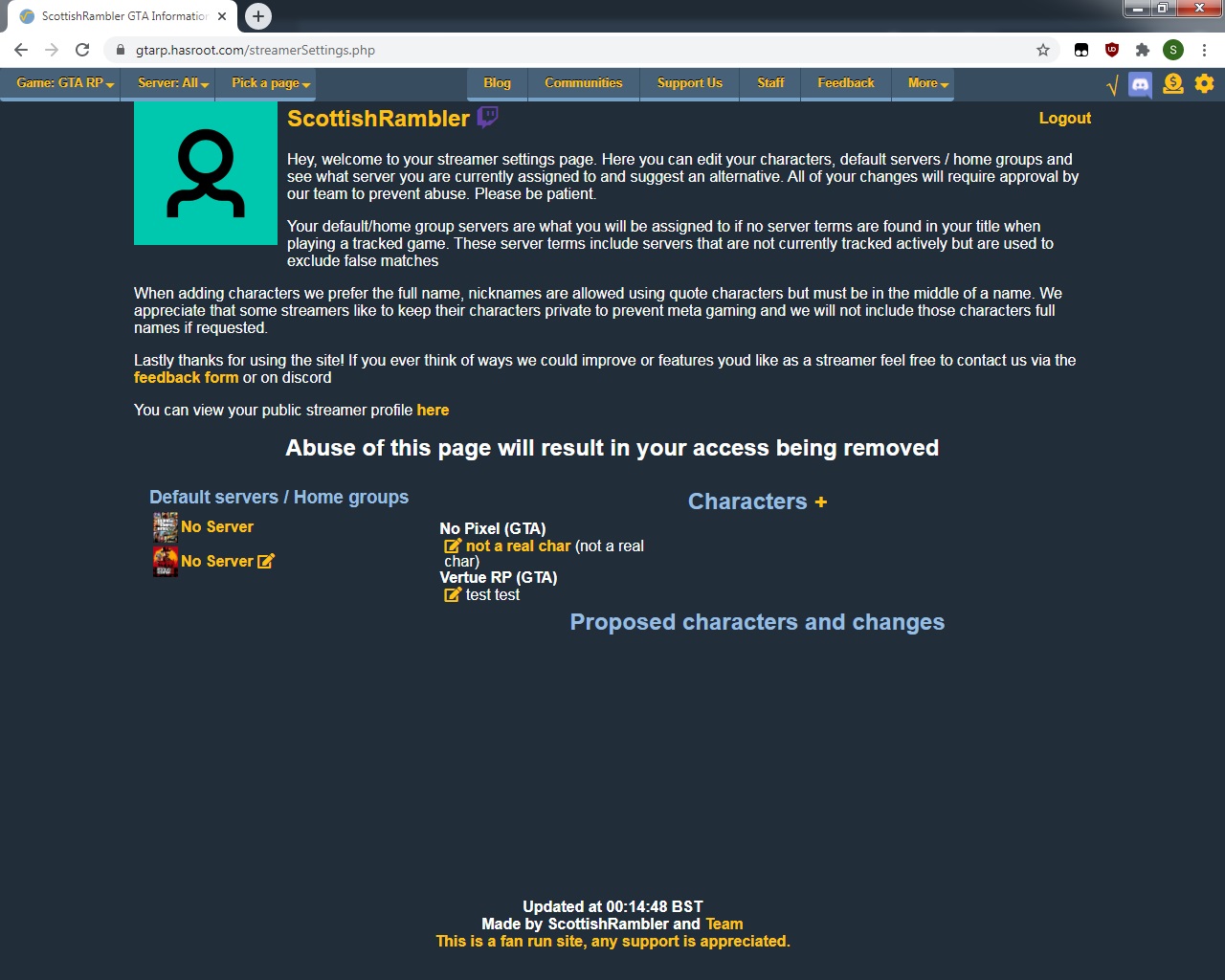 I have been talking about this one for a long time and it just kept getting delayed, there was a lot of reasons but it is finally here. You can now login to the site using a twitch account, currently this functionality is only useful for streamers who play GTA or RDR2 rp. When you login you can see all of your data, edit or add characters and change your fallback page. There is a description of the features on the page for our tracked streamers, if you are not a tracked streamer you can request to be tracked. All of the changes will require approval for our team to prevent abuse and maintain standards. You can see what this page looks like on the right and you can access it now here

For three years all of the sites character data has been entered by myself and staff. It is a lot of work and we occasionally get things wrong, I have toyed with the idea of importing from a wiki but I always felt it was rather rude to do so without giving anything back. That being said I am pleased to announce that we now have a no pixel wiki importer, we have had good relations with the No Pixel wiki team for awhile and Dahyashi who has added more characters than anyone apart from myself is an admin over there. I have created a team profile for the additions this importer generates to give them credit for all of their hard work and recognise their contribution to the site. One added benefit is you should find that a lot more of the wiki links for the no pixel characters actually work now :p. I will also be adding a different link colour to signify characters that currently do not have articles (and tags such as gang tags or ems / police / DOJ are heavily in my mind, but no eta).

Thanks to the No Pixel wiki team and all their hard work. You can check out their HasRoot profile at here and the wiki can be found here.

This is something I have also been meaning to get to for awhile, I have been blessed over the past couple of years that a lot of people have approached me to help out the site. This has taken the form of advice, feedback, character data, moving streamers , updating fallbacks and dealing with user feedback. It has helped take the load off of me souly and their contributions have helped make the HasRoot site better than I would be able to alone.

I am not great at thanking them for their efforts and to most users of the site they are invisible, but Andre suggested I could add more staff roles to recognise their contributions and I figured it was the least I could do. While I (and I hope all of our users) appreciate all the work of the HasRoot team no matter how small or big I have picked some people to reward with new ranks. Thank you to them and all of the HasRoot team who have volunteered their time over the years.

As for the changes in order of rank and date of joining the site.

Dahyashi has added more characters than anyone other than myself, which was a title held by Andre for a very long time. She joined us from the No Pixel wiki team and while being a mysterious staff members who prefers to keep to herself her impact on the site has been immense to date, in recognition of this she has been made a Senior team member.

The man who took over the Family RP section which was often neglected, constantly helping me determine players whitelist status and helping assign people properly between Family RP and Family RP Public.

Cexitime approached me to help out with character data and has been a hard worke for a number of servers over the year and a half hes been a helper. In recognition of this he has become a Team member.

Ult1mat3 was a member of our discord who was often posting additions and corrections to the #incorrect-data channel. I approached him asking if he would like to become a helper for the site but he wasn't sure if it he would be able to on mobile. He was right that it would not have been possible, infact untill then I was fairly aware the site didn't work well on mobile but I never really tested it or tried to fix it. Realising how bad the experience was I was spurred to action to create the mobile update which involved a lot of improvements overall. For the kick up my arse and all his hard work on revlution rp data and other servers Ult1mat3 has become a HasRoot team member.

Lilly came on with two objectives, one to help out with TRP data and the other to help out with site design. Unfortunately her initial efforts of working on alternate skins for the site have been delayed by me constantly changing things, she has however consistently helped me with new site changes designs and massively helped refine the design of a soon to be announced project. This among her work on the site data more than earned her a spot on the HasRoot team.

Amanda approached me to add The Crew RP as a tracked server, as with anyone who approaches us I offered to make her a helper to help with data for that server. Since then she has made The Crew RP section her own domain, constantly making sure characters and streamers are up to date. It is rare we get any helpers on board from servers we add and rarer still to have them be so dedicated. For this Amanda has become a Hasroot Team Member.

And a thanks to the whole HasRoot team!

I know that was a lot of text but these are just a few of the people who have helped me over the years, you can see the whole list and all of their efforts at the Team page and their profiles here.

If you got this far thanks! Some ending rambles.

I know I say it a lot but I do want to start blogging more about what is going on, I am constantly working on the site in various ways and even adding large changes without really announcing them. It does take me awhile to write these however and I tend to try to avoid the spotlight so I constantly put off writing any. That being said I will endeavor once again to post more frequently, I also have been using the discord more to announce changes even if they aren't things our users are going to see. There was a bunch more things that have changed but this blog is already far too long, maybe ill blog more about what I have been up to this year at a later date.

Also an announcement of an announcement, I have been working on a project which I think some of our No Pixel users will be really excited by but currently I am unable to release any details about it. I hope to be able to announce it in the next two weeks but it has been something I have been working hard on for the last month, I think it is really cool and has a LOT of potential.

Thanks for reading even if you didn't make it to the end.

All the best and hope you are enjoying the site.

Last updated at 2020-10-09 23:25:27
Feedback
Enter a streamer name then select them from the autocomplete. This only searches streamers we track, if you think we are missing someone let us know via the feedback form or #incorrect-data on the discord.
No Streamers found with this name
This feedback form is for the Has Root site not No Pixel.
Empty